ATLANTA, Dec. 5, 2017 – It is that time of year again when giving back to the communities surrounding us is weighing on our minds. As a nursing organization, the ACEN has giving back on its mind year-round. 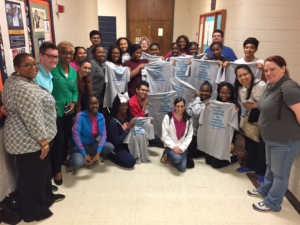 Each year, the ACEN team participates in an out-of-office excursion to help promote teamwork as well as inner-office collaboration and growth. This year, we chose to give back to the greater Atlanta area by providing a Career Day to students in Dr. Jeannette Francis-Ferris’s Health Sciences Courses at South Cobb High School in Austell, Georgia. Professional staff, our executive team, and our administrative team shared experiences, including our educational backgrounds and what led us to the ACEN. Students engaged in conversation and questions with our team and showed a thirst for knowledge. Before leaving the high school, members of the ACEN “editing team” assisted students in writing résumés for entrance into their desired college programs.

As the year progressed, members of the ACEN family were affected by natural disasters, resulting in damage to nursing programs in Texas, Florida, Puerto Rico, and the U.S. Virgin Islands. Many of our programs were flooded and without power, some even without drinkable water or access to food. In an attempt to help our programs, as family does in a time of need, the ACEN enacted Policy #6 Delay/Advancement of Accreditation Visit, which allowed programs affected by the hurricanes to postpone upcoming site visits and allowed programs to submit reports outside of pre-established timeframes. Additionally, the ACEN has partnered with four non-profit organizations to encourage monetary donations to the communities hardest hit. Partnerships include the Neighborhood Health Clinic in Collier County, Florida, which was one of the worst hit areas in Florida after Hurricane Irma and home to many people below the poverty line; the Hispanic Foundation, which is the leader in the nation’s Latino non-profit organization with the objective to aid Puerto Rico in its long road to recovery; the Rebuild Texas Fund, which is a combined effort of the Michael & Susan Dell Foundation and the OneStar Fund to provide areas of need and long-term recovery from Hurricane Harvey in Texas; and the Community Foundation of the Virgin Islands, which supports the current and long-term needs of proceeds to their designated efforts. Recovery in these areas is ongoing, and these organizations are still accepting donations.

Finally, each year during the holiday season, the ACEN offers its support to one local homeless shelter. This year, the ACEN is working with the Covenant House: Helping Children and Youth. As the name suggests, Covenant House is a homeless shelter for teens and young adults. These individuals come from a variety of backgrounds, including abuse victims, those kicked out of their homes, those who have aged out of foster care, and victims of human trafficking; but all have one thing in common: they have nowhere else to go, especially during the holidays. So, to help make the season bright, the ACEN has organized an in-office gift drive and will be delivering the gifts mid-December.

While it is important to remember to give in the winter months, it is a great feeling to be part of an organization that gives year-round. The ACEN believes in helping the community that serves as our home, as well as our family of programs. As the holidays come and go, the ACEN wishes everyone good tidings for the year ahead.