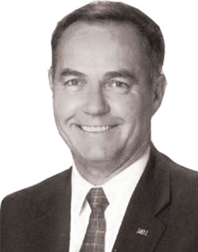 Dr. John H. Russell served as McMurry University’s 11th President from August 1, 2002 until his retirement June 1, 2013.  Dr. Russell, who previously served as Executive Vice President for Academic Affairs at West Virginia University Institute of Technology, holds a B.S. in Aerospace Engineering from Auburn University, an M.S. in Aeronautics and Astronautics from Stanford University, and a Ph.D. in Aerospace Engineering Sciences from the University of Colorado at Boulder.

A love of airplanes and a desire to serve his country led Russell to join the Air Force where he demonstrated his commitment to service, to teaching, and to scholarship in a successful career that spanned 33 years and led to the rank of colonel.

After retiring from the Air Force in 1999, he was named Executive Vice President for Academic Affairs at West Virginia University Institute of Technology, an institution located in Montgomery, WV.  He assumed the McMurry presidency after three years in West Virginia.

Dr. Russell currently serves on the University Senate of the United Methodist Church and as a Director of SurveyVitals.